Microsoft Is Now The Premium Sponsor of Open Source Initiative(OSI)

Microsoft’s relationship with Linux and Open Source is increasing day by day and it seems like the bond isn’t going to break anywhere in near future.

Microsoft, the company that once hated the Open Source movement is now trying to embrace it in all possible ways. Today Microsoft is the top contributor of Open Source Software on GitHub.

To even more embrace the FOSS force Microsoft has now officially joined the open source software movement by becoming a premium sponsor of the Open Source Initiative.

Open Source Initiative have expressed their happiness. “After years of increasing involvement and engagement in open source software projects and communities, Microsoft takes what may be their most dramatic step, joining the home of the open source software movement,” the official announcement by OSI reads.

For those who aren’t aware of Open Source Initiative (OSI), is a non-profit organization that works to promote open source software.

It hasn’t started with this, Back in 2014, Microsoft released .NET under an open source license. Also, Microsoft recently announced SQL server for Linux. Also with Windows 10, Microsoft announced Windows Subsystem for Linux(WSL).

Jeff McAffer, Director of Microsoft’s Open Source Programs Office, said that OSI’s contribution plays an important role in the “success of open source as a first-class element in the software industry.”

Under the leadership of Satya Nadella, Microsoft has changed its voice over Open Source Community and Linux. Microsoft has already entered the Open Source Ecosystem by working closely with open source organizations like the Linux Foundation, Canonical, Red Hat, SUSE, etc.

Recommended:  Holding Enter for 70 Seconds Will Let You Take Down a Linux System, Here Is How to Fix It.

Also Read: Have You Ever Wondered How Linux is Built and Maintained?

Is Microsoft really trying to uplift the Open Source Movement or is slowly trying to suppress it for its own benefits?

What is your opinion about Microsoft’s relationship with Open Source Initiative? Do you agree with Stallman’s Statement of “Microsoft Love Linux To Death“? Tell us in the comments below.

Microsoft Is Now The Premium Sponsor of Open Source Initiative(OSI) 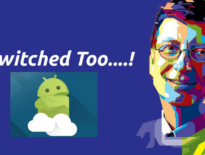