Remember the light Sabers in Star Wars? The glowing swords we saw in the Star Wars are fictional energy swords featured in the Star Wars universe. The lightsaber is the signature weapon of the Jedi Order and their Sith counterparts, both of whom can use them for close combat or deflect blaster bolts.

Is it really possible to make one such? Technically it is not possible to create a lightsaber in reality and this because of the fundamental particles of light, photons don’t interact with each other in reality, they simply pass each other by, like indifferent spirits in the night.

But what if light particles could be made to interact, attracting and repelling each other like atoms in the ordinary matter? One tantalizing, albeit sci-fi possibility: lightsabers — beams of light that can pull and push on each other, making for dazzling, epic confrontations. Or, in a more likely scenario, two beams of light could meet and merge into one single, luminous stream.

Making such wonderful inventions actually require bending of light which may seem to be almost impossible as photons travel in straight lines. Recently Scientists at MIT, Harvard University, and elsewhere have now demonstrated that photons can indeed be made to interact — an accomplishment that could open a path toward using photons in quantum computing, if not in lightsabers.

In controlled experiments, the researchers found that when they shone a very weak laser beam through a dense cloud of ultracold rubidium atoms, rather than exiting the cloud as single, randomly spaced photons, the photons bound together in pairs or triplets, suggesting some kind of interaction — in this case, attraction — taking place among them.

While photons normally have no mass and travel at 300,000 kilometers per second (the speed of light), the researchers found that the bound photons actually acquired a fraction of an electron’s mass. These newly weighed-down light particles were also relatively sluggish, traveling about 100,000 times slower than normal noninteracting photons.

Vuletic says the results demonstrate that photons can indeed attract, or entangle each other. If they can be made to interact in other ways, photons may be harnessed to perform extremely fast, incredibly complex quantum computations.

“The interaction of individual photons has been a very long dream for decades,” Vuletic says. 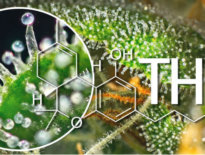 Science Knowing Your Limits: Why You Should Ease Into THC…

Technology The Top 10 Tech Destinations To Visit This Year
0